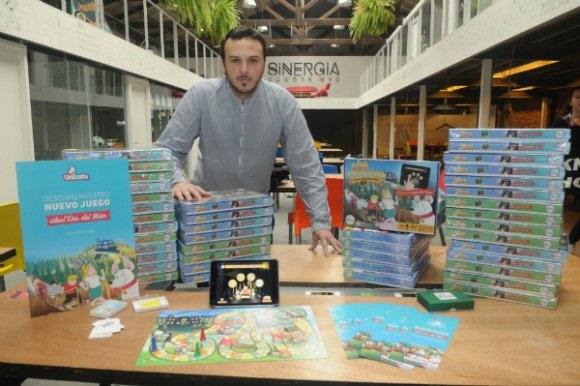 At just nine years old, Montu designed a wooden pinball machine, an early example of his desire to join tradition with new technology. Today he’s the one behind The Explorers in search of lost treasure, which is a traditional board game with a path, game pieces, and dice that also incorporates a tablet or smartphone.

The group grew into the company, Unicorn Games, at the Sinergia incubator, a shared workspace located in the Palermo neighborhood. The company gathered support from BID and the Agencia Nacional de Investigación e Innovación (National Investigation and Innovation Agency).Unicorn made their first game, and their characters will compete in the “world cup” of transmedia projects, Power to the Pixel, which will be held October 13-16 in London.

Along with co-founder, Constanza Wulff, the team grew, often with the support of other entrepreneurs at Sinergia. Graphic and industrial designers as well as software developers were also added to the team.

Children born after the year 2000, the “millennials”, are fascinated with the technology that grew alongside them according to sociologists. However, excess use of technological devices poses a threat to the development of social and relationship skills.

“Applications did not resolve the issue of shared entertainment. I saw it with me nieces and nephews: each of them playing on their own. I realized that this was not going to be resolved with more technology. When I was younger, board games took care of organizing everything: rules, turns, rolling the dice, and advancing around the board. Basically, all of the fun of playing”, explains Jacinto.

The answer was to use technology in order to organize the situation. “I started to investigate what was on the market related to this issue, and I didn’t find anything. With my business partner, we were finally able to find a way to combine the digital world with paper, game pieces, and dice”, he shares.

Using his nieces and nephews as guinea pigs along the way, Montu worked on a solution to the three children and one tablet dilemma. He was able to create a board game, similar to the old “Game of the Goose”. The objective of the game was to get three coins. Players are required to roll a die, but the coins were earned as a reward for certain skills on the tablet.

“The idea links the physical world with the digital, while keeping it fun. And only one tablet is needed for 2, 3, or 4 children”, he comments.

The box contains the game board with a marked path, game pieces, dice, and a card that allows the application to be downloaded on any tablet or smartphone. A 20 second video explains the rules.

“One of our first ideas —states Montu— was to create very technological games, but this created a big gap between the skills of the owner of the tablet and the skills of a player using the tablet for the first time. So we decided to use the skills that all children born after 2000 have: memory, logic, visualization, and speed”.

The first tests showed that the game took 40 minutes to play, half of the time that traditional board games take. However, for the kids of today who are used to another dynamic and instant prizes, that was too long. “So, we made it so that each action would be rewarded quickly. The game now lasts 24 minutes. And we found that the children played at least two games in a row.” he says.

The rules provide the players with shortcuts, where players can use a coin as a toll. This forces the children to think about whether they want to spend their coin or not, which they are also playing with as they wait for their turn. Adults can participate in games that do not become endless.

“Any traditional game can be adapted, but that adaptation has to be imagined. Each game’s dynamic must be respected so that that the result is natural. The children of today are very demanding, so the bar is high”, states Montu.

The Explorers are now for sale in Montevideo and Punta del Este for 600 pesos (US$ 18.42), and will soon be for sale throughout the rest of the country. Beyond that, there are two other upcoming launches: Rescue from the Sunken Ship and Escape from the Red Planet. The line will also be sold in Argentina for Christmas. “They asked us to manufacture in Argentina, but we want to continue with a local manufacturer.”, he comments. “It’s not a game for the upper class. Seven out of ten homes in Uruguay have some type of computer, and six out of every ten children have their own electronic device”.

“The world spends 3 trillion hours a week playing video games. At first glance, you might think that’s a lot of time wasted on games, but a deeper analysis shows that something can be done. A big part of our idea is to take these games to education. We have prototypes and we want to get to Plan Ceibal”, states Montu.

The Explorers characters are a team that takes on challenges. Each of them possesses a skill that complements their teammates in order to resolve the problems they’re faced with. One of the characters takes care of the group while another is responsible for the planning. Two other characters are the brave ones who take risks. The dog is the intuitive one who gives advice and has his own Twitter account.

This Unicorn project is ambitious, it aims to include its characters in an educational magazine and present them in a collectible card set.

At the same time, Explorers were selected last Tuesday by a jury at Mediamorfosis 2015 in Buenos Aires as one of two transmedia projects from the region to participate at Power to the Pixel in London, which is considered one of the most important transmedia events in the world.

Montu was also invited to speak at Mediamorfosis Uruguay which will be held tomorrow in Montevideo.

Board games have been around for thousands of years. A game called Ur was played in ancient Mesopotamia almost 5,000 years ago. According to archeological investigations, seven game pieces (black and white, like checkers or chess) are used on a tablet along with triangular dice, although the rules are ignored. A painting in the ancient queen Nefertari’s tomb (XIII century B.C.) depicts her playing Senet, which could be a derivative of the game Ur or a predecessor to backgammon. Tutankhamun had four Senet sets in his tomb to keep himself distracted for eternity. The first version of the “Game of the Goose” was gifted by Francisco I de’Medici of Florence to Felipe II of Spain around 1574. Ludo, which is an adaption of an old game from India, was patented in 1896. Monopoly was created at the start of the twentieth century.

It’s played at the table

Like Ludo and other traditional forms of entertainment, Explorers In Search of Lost Treasure is played at the table with a game board, game pieces, and dice. The technological novelty is the addition of a tablet or smartphone which allow players to earn coins in order to advance and win the game. Depending on where the player lands on the board, the application will indicate the player’s prize, determined by a quick and simple task on the electronic device that will require certain skills.

The traditional game is complemented by the technology provided by the tablet, the essential “hook” needed to capture the attention of children born into the age of electronic devices. “The aim is to create a dynamic that constantly oscillates between the physical and digital world.”, Jacinto Montu explains. Unicorn will launch two other games with the same framework by the end of the year, but the project goes beyond that with its end goal being to reach education through Plan Ceibal. They also have games that interact with each other in the works, thanks to the Internet of toys.